Sorry. This holiday is going so well, I’ve completely had no time to catch you up on it.

It’s been some serious miles cruising down the wrong side of the road.

I got to try the local wildlife I alluded to in my previous blog. Freshwater trout in almond and butter sauce, with vegetables grown in – SMACK! – the hotel’s organic gardens. Mike and I caught up on our lack of sleep, wandered the streets full of art galleries and soaked up the atmosphere of the St Lawrence and surrounding farm land. 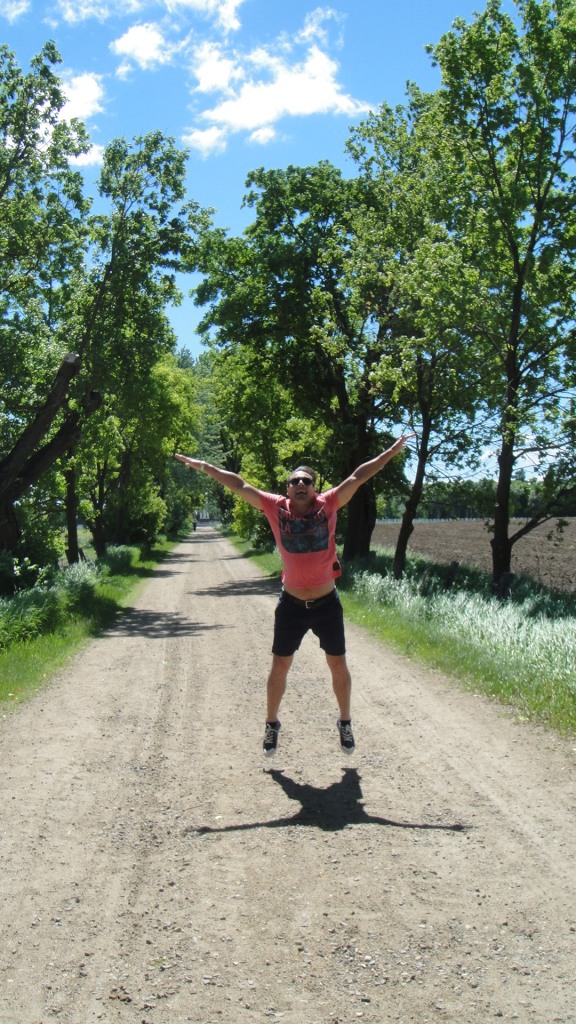 Baie-St-Paul is the original home of Cirque Du Soleil. They got their start in this small town in the Charlevoix region of Quebec before they became a huge international success. This little hamlet of wooden buildings surrounding a church square. You know you are in a French Catholic country; every town and even city has a skyline dominated by green-domed copper or tin towers. A mixture of ornate crosses or finial spires. Most of the street and town names combine a “St” and saintly-inspired name, like Hubert, Sulpice or Cuthbert.

Really – St Cuthbert? It doesn’t exactly conjure an image of being burnt at the stake, or fighting demon-possessed snakes. Apologies to my Catholic readers, I’ll Google “St Cuthbert” when I next get a WiFi signal.

So back to our little village on the shore of the St Lawrence River (yep, another Saint’s name). So what was I up to. Yep, home to Cirque Du Soleil, and some influential artist from Canada’s “Who’s Who with a Paint Brush”.

This is the second time we’ve explored Montreal together. Both times, the ‘Ville’  blessed us with sunny weather, blooming flower baskets, wooded parks, baguettes, bike rides, restaurant ‘patios’ and picnics. Mike and I hired bikes and rode to the 1920’s food and flower Marche Atwater (Atwater Markets), constructed a picnic, and then hit the many bike paths this city respects and utilises. We even got to do a circuit on Montreal’s Grand Prix track. Les Québécois love their speed in any discipline. 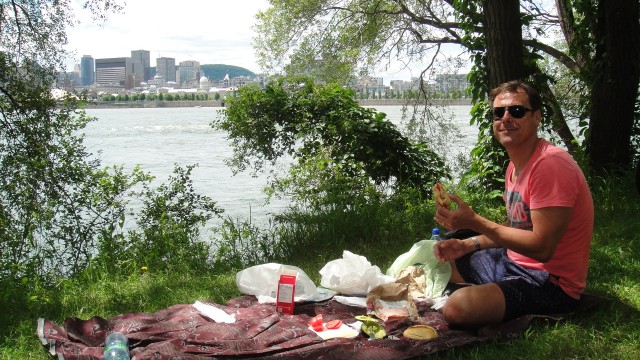 We even rode up Mont Royal. Having survived the ride to an elevation of almost 200m, I concur with the qualifier “Mont”. Mike’s deadly treadly kept slipping gears on him, but he arrived at the “lookout” I had insisted we ride to. Mikey pulled into the car park sweaty, red and none too happy. It was great viewing all round. A lofty perspective of Montreal, along with a stretch Hummer full of teenagers in their final year prom attire. 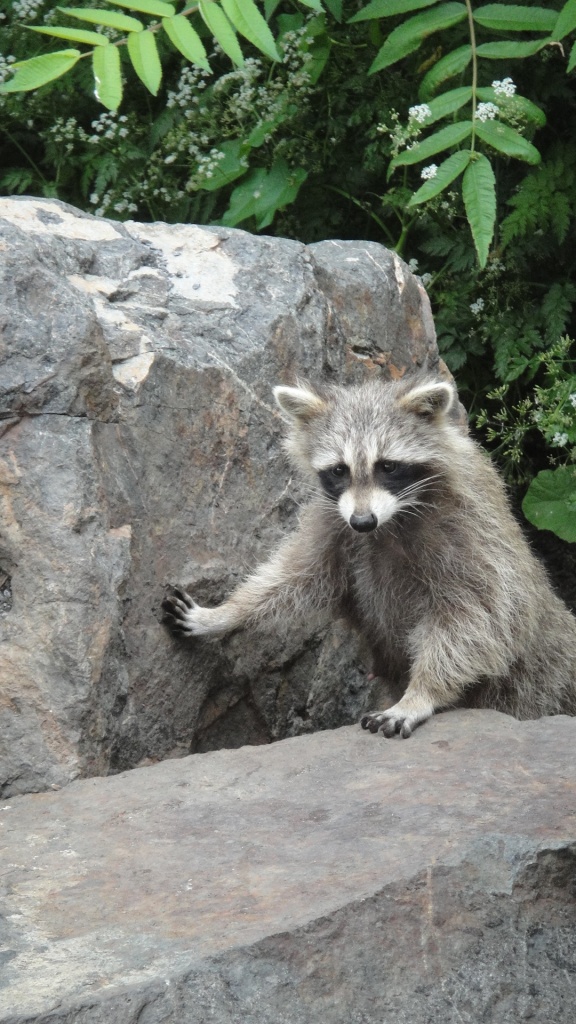 Even the raccoon was admiring the view (well-positioning himself for tasty tourist treats more likely).

The view was a good soother, as was the satisfying free-wheeling ride down through the wood-lined road back into the city.

God. I’m just going through our itinerary and I haven’t even mentioned Ottawa, the capital of Canada that French and English Canadians share. The Ottawa River dictates the lay of the land between Quebec and Ontario; culture, advertising laws, food and language that is used change merely by crossing a bridge from one suburb to the next. Those ubiquitous red and white maple leaf flags, Governor General’s Foot Guards, Mounties, bagpipes, war memorials, Parliament House, Mounties on horseback, pipe bands and paintings of conifers. It was nearly a complete Canadian overload, but then it is the Canadian capital.

And that that was just on one day. The highlights being a tour of Canada’s House of Parliament and being photographed with a bear; they are really friendly and I think they get a bad rap. 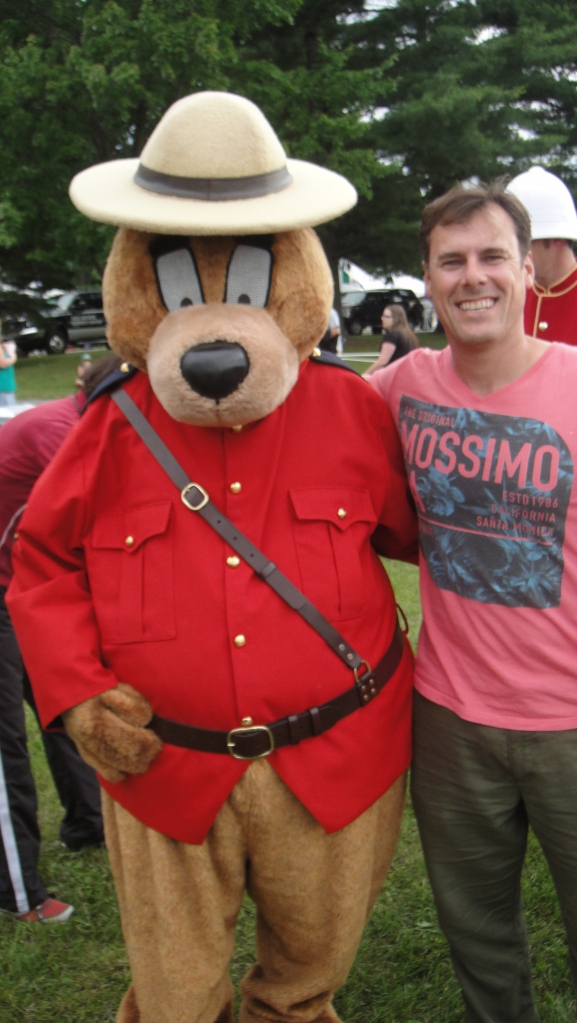 And of course visiting Beechwood National Cemetery, where Mike’s dad rests in a pristine military section.

Then there was Mike’s godparents and their family that welcomed us, like family.
The National Gallery of Canada – Australia could learn from this gallery – and the world-famous RCMP Musical Ride. By 8:30pm, the arena was a blur of horses, Mounties and those red and white flags.

Now that was a long day.

When it comes to these civic events in Canada, like this free event put on for the people of the Ottawa-Gatineau National Capital Region every year, the speeches tend to go on and on … It’s a narcoleptic loop of acknowledgement to everyone from the sponsor, his wife; the American Ambassador, his wife; the Mayor of Ottawa, his wife; the retiring General, his wife … Down to the retiring cell phone rep (I kid you not) and his wife.

Now do that in two official languages.

Which leads me to the idyllic location that I find myself in now. Sitting on a wooden deck, under the dappled shade of an oak, surrounded by woodland, the Ottawa River and the hubbub of “The Chester Knob” family reunion: cousins, cooking breakfast, catching up and continually laughing. We have arrived at a family cottage on this large island in the middle of the Ottawa River. I am finally getting to experience “Cottage Living”. An institution to the lucky Canadians who have access to one of the thousands of wooden sanctuaries on lakes and rivers across Canada.

It was exciting turning off the highway and onto the shaded track, catching glimpses of the blue river through the lush green forest. This was perfect for an Australian: no beach, no sharks to cull, no snakes to be bitten by, the still waters a perfect mirror of the forested island in front of us and the Laurentians beyond.

I sound like the glossy pages of “Cottage Living”.

We share this woodland paradise with mosquitoes in the millions – and they bite through clothing! It become abundantly clear why Mike’s considerate relatives have ‘bug spray’ at every exit from the cottage.

In Australia we have a list of deadly critters, covering most of Darwin’s species.

Canada – Give me the short-term terror of a white pointer, or the shallow final gasps after a funnel web spider bite any day. You do persistent, continual, and annoying to perfection. These mosquitoes are ruthless.

However, after a quick “sheep dip” of Deep Woods insect repellent, it’s back to BBQs, fry-ups, canoeing, beautiful food, way too much wine (and Knob Creek Bourbon, thanks to the influence of cousin Jason) and laughs. Seriously it’s like therapy, the amount of times I’ve laughed until I’ve cried here. 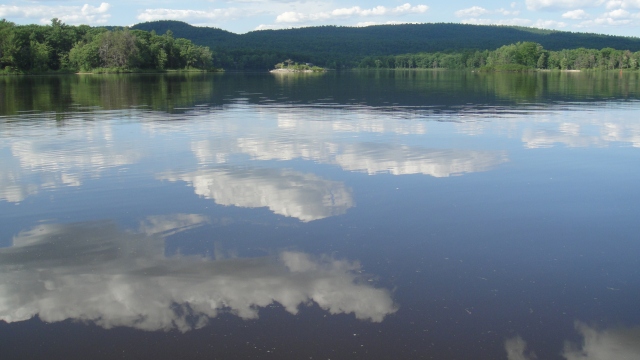 For the next four days of the Canada Day weekend, it’s beavers (one has a lodge in front of the cottage), fireflies, pig on the spit, maple butter, Nanaimo Bars (a sweet Canadian culinary institution, thanks Aunt Flo), fireworks (it’s legal here), Canadian music (no Justin Bieber) canoes, deck chairs with cold beers in the water (it’s a balmy 28C) laughs and

Time to reapply, my invisible shield is definitely slipping. 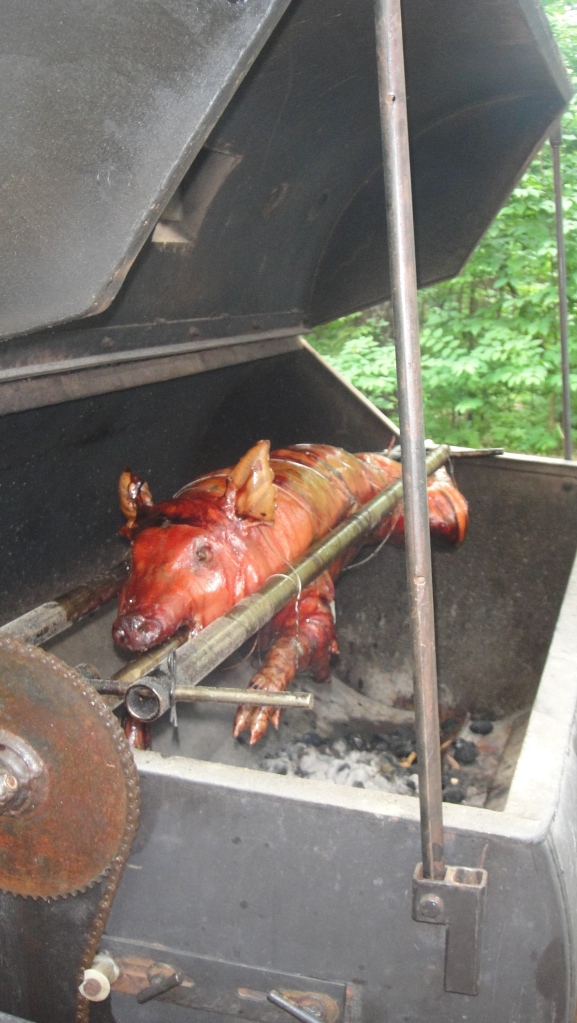 * I have to add this foot note before I post:

The ‘Canadian Cottage Experience’ that I have always wished to experience is complete – “Tick” 🙂 Thank you so much to Mike’s cousins (and their bestie) and Aunt Flo for making the experience so perfectly Canadian. The time and effort that went into the Canada Day Long Weekend was obvious. We cannot thank you enough for the incredible food, comfortable bed, gallons of bug spray, side-splitting laughs, the time spent looking for Jimmy, and of course the Pig Roast. We will always cherish our time spent on the Ottawa River with you. XXXX

Richard has worked in hospitality and travel for almost three decades and has been a regular traveller since childhood. He now travels for both work and pleasure, and is a Senior Contributor to Trip Advisor and other digital media travel platforms.
View all posts by Freoroamers →
This entry was posted in Canada and tagged Baie-St-Paul, Montreal, mosquitoes, Oh Canada!, Ottawa River, RCMP Musical Ride. Bookmark the permalink.